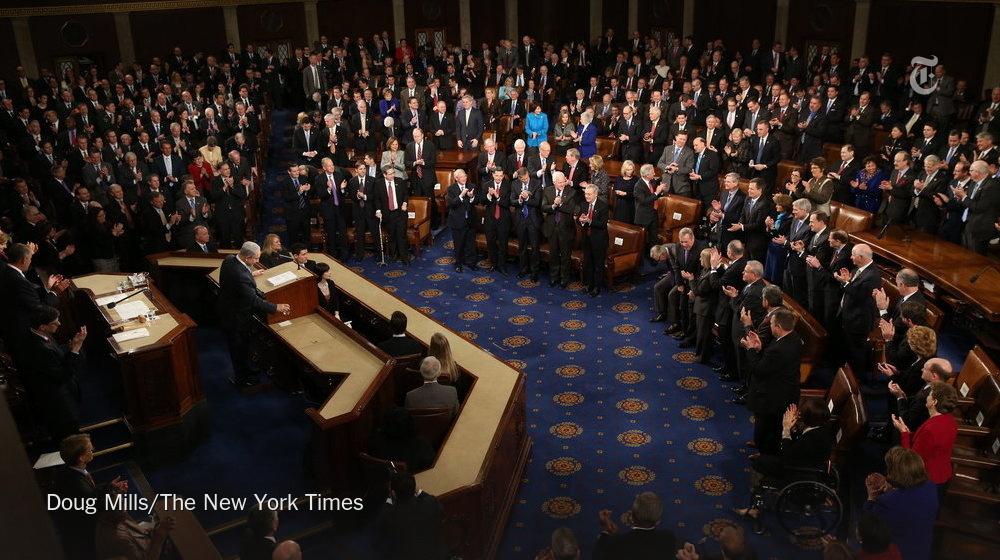 Following the death of Boris Nemstov in front of the Kremlin, Western media and US politicians didn’t miss the opportunity to demonise Russian president Vladimir Putin, implying he was directly responsible for or complicit in his death. A multitude of people also superciliously derided Russian Today for its propaganda. Ironically only days later notorious war criminal Netanyahu addressed Congress and received lavish praise from attendants.

The purpose of this post is not to draw equivalence between Netanyahu’s crimes and Putin’s, they obviously differ in certain aspects, nor is it intended to absolve Putin from past crimes, the purpose is to illustrate the absurdity of the premise that the Western media establishment is somehow immune or less inclined to propagandising which is quite patently false. From the Iraq War, to the drone attacks, the Snowden leaks and their coverage on the Palestine-Israeli conflict their coverage has been palpably biased.

Not even a year after the brutal incursion into Gaza which killed thousands, John Boehner speaker of the house shamelessly decided to invite the Israeli Prime-Minister to speak on Capitol Hill. Netanyahu failed to directly notify president Obama of his visit which is customary for a head of state before visiting the US. Netanyahu who maintains his trip to the US is not ‘political’ is preparing for the Israeli elections which occur on the 17th of March, US Republicans revere him and are very supportive of him winning another term and wax lyrical about his jingoistic foreign policy on a constant basis. Democrats are less subservient to Netanyahu and Obama has expressed criticism of his visit resulting in Republicans levelling accusations at him that he’s betraying his country. Just before Netanyahu set off to Washington he claimed he is the emissary of all Isreali’s and all Jewish people, it was criticised by Senator Feinstein but it gives an insight into the grandiose perception he has of himself.

The main topic of his speech was concerning the nuclear deal between America and Iran. Netanyahu began by commending America and Obama for persistent military support and then he documented America and Isreal’s history, before moving onto the threat of nuclear weapons.
Netanyahu has a history of crying wolf in terms of Iran’s possession of nuclear weapons, it goes all the way back to 1992 when Netanyahu erroneously claimed Iran were three to five years away from developing nuclear capability and that America had to lead the fight in counteracting that possibility. He’s made further warnings including in 1995, 2002, 2009 and 2012. Weeks prior to his speech, disclosed documents showed Israeli intelligence service Mossad contradicting Netanyahu’s claim in 2012 that Iran were a year away from developing Nuclear weapons. The agency concluded that Iran were not performing the activity necessary to create Nuclear bombs. Nevertheless it appears most of Congress continue to regard Netanyahu’s claims without a whiff of suspicion. He also made the dubious claim Iran is intending to nuke Isreal and drew parallels to the holocaust. However it betrays logic to believe the Iranian regime want to wipe out Israel, it would kill scores of Palestinians in the process and Israel has possession of a second strike nuclear capability which would render any nuclear offensive from Iran a death wish, they would be immediately obliterated following an attack. Clifton W. Sherril of Troy University stated in 2012 that “It is highly unlikely that the Islamist regime plans to actually detonate a nuclear weapon in an offensive attack. Both of the obvious targets, the United States and Israel, have a second-strike nuclear arsenal capable of threatening the Islamist regime’s survival.” Perhaps though the largest indictment of his expertise on foreign policy is his speech to Congress in 2002 concerning the Iraq War. He said “If you take out Saddam, Saddam’s regime, I guarantee you that it will have enormous positive reverberations on the region” Suffice to say that prediction didn’t turn out too accurate and yet American politicians are still heeding his views on Iran. During the speech he also praised president Obama for his support during the bombardment of Gaza last year, Democrats without a degree of hesitation stood up and applauded. Support of Israeli’s tyranny is undeniably bipartisan. He concluded by saying “You’re wonderful, thank you America, thank you” a clear show of gratitude for America’s complicity in his war crimes. He then received a standing ovation.

American politicians are hypocrites, and that is well established but what’s concerning is how little resistance his attendance to Congress received. Code Pink a courageous group of activists protested outside and expressed their disdain for Netanyahu, a group named Israelis For A Sustainable Future also marched but the vast majority of the American public were apathetic about the visit. Just hours before the speech a report from Gallup was released showing American support for Netanyahu has risen quite significantly since 2012, despite the atrocity committed in Gaza last summer. This is quite clearly attributable to the sophisticated propaganda system in America which is almost invariably reverential regarding Israel; portraying Netanyahu as a reasonable figure is a pernicious form of propaganda which impacts public opinion resulting in alarmingly high approval of him and renders the prospect of policies conducive to peace for Palestinian people remote. You will never see any of the major media establishments in America like CNN, Fox News or ABC characterising Netanyahu as a war criminal despite there being clear consensus from human right groups and ample evidence of it. To rub salt to the wounds a revolting hashtag gained prominence on Twitter during the speech dubbed #IStandWithBibi mostly consisting of Republicans eulogising Netanyahu. Furthermore prior to the horrific and heinous invasion of Iraq in 2003 Western media outlets were very hawkish, and at times even well regarded journalists resorted to accusing opponents of the war of being part of a fifth column or betraying the Iraq people.

Over the last few days Western media has indulged in criticism of Putin, some of it reasoned, some of it not, but by committing a false dichotomy, insinuating it’s a case of the evil Putin vs the moral West it inadvertently revealed its own form of propaganda, perpetuating the myth that Western powers are moral. Today’s warm reception towards Netanyahu and the media’s coverage of it reinforces the point that our propaganda system resembles Russia’s more than we’d care to admit.

A collection of the most deplorable tweets from Republicans worshipping Netanyahu like a deity:

#NetanyahuSpeech will go down in history as the huge deal that it is. That was amazing. Interrupted by applause 40 times. #IStandWithBibi

Bibi is positively Reaganesque. This is what a real leader looks like folks. @GolanMay #IStandWithBibi pic.twitter.com/kvttqmXX6r

I sincerely thank God for delivering Bibi @netanyahu to us today! #NetenyahuSpeech #tcot

Just when I think I couldn't admire Netanyahu more, I learn he made Pelosi cry like a girl.

I was pleased to hear @netanyahu's speech today & will continue to #StandWithIsrael http://t.co/JPdGJh1lEZ

Netanyahu instilled more American patriotism in one speech than Obama has in 6 years. #IStandWithIsrael #IStandWithBibi #NetanhayuSpeech

Shame on any Democrat who did not attend the #NetanyahuSpeech. These Anti-Semitic pieces of trash need to be called out for what they are.

A historic day today! The Israeli Prime Minister will educate Neville Chamberlain Obama about the nature of evil in our time. Must see TV!

Bibi's speech (interrupted by applause 40x)was one of the most inspiring ever given in the US House #IStandWithIsrael pic.twitter.com/HotBSo5jZe

Netanyahu is leader of the free world now. #USA #Israel

No you are not alone! If Obama doesn't stand with you❌We the American Patriots do✔️#NetanyahuSpeech #IStandWithIsrael pic.twitter.com/RPsTRImocP

Prime Minister Netanyahu is a true leader, I hope you had someone take notes for you Mr. Obama.