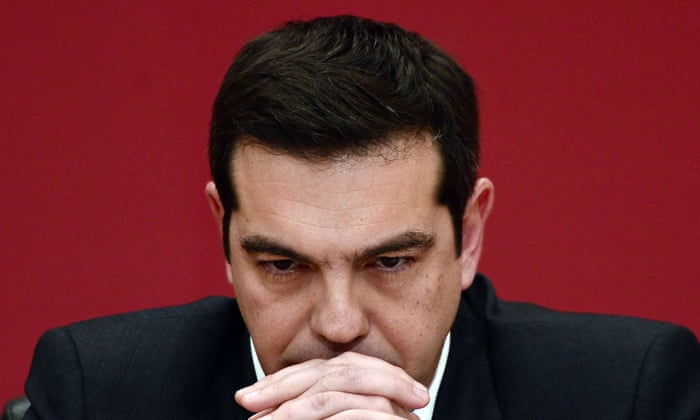 On Monday, just over a week after the Greek people overwhelmingly voted no to a bailout package that would include more harsh austerity, Greece and its creditors came to an agreement which will prevent a Greek exit from the Eurozone but which includes harsh measures which will compound the economic situation in Greece. The deal will pass before parliament with strong likelihood it will pass.

Prior to the referendum last Sunday, many of the Greeks felt that they could reconcile their desire of ending austerity with preserving their place in the Eurozone, many felt the bureaucrats in Brussels, who were threatening a Grexit if a no vote prevailed were bluffing.
This was indeed myopic, the main powers in Europe were well aware that Syriza had no legitimate strategy to leave the Eurozone, and they knew they could issue harsh ultimatums because without a contingency plan Syriza had no option but to surrender. Tsipras conceded responsibility for the defeat.
This does not mean the referendum and protesting was futile, admittedly it didn’t produce any substantive change to Troika’s plans but it did send a message throughout Europe that there is growing resistance to the Neoliberal system espoused by the EU, currently that resistance is not yet large enough to mount a serious challenge, but there is no question that it is growing.

Most sensible people acknowledge that Troika and Germany’s behaviour over the last few years has been deplorable but that does not shield Syriza from much warranted criticism.
They were backed into a corner but they should have had the foresight to prepare for that eventuality. Any hopes the referendum would yield a better deal were quickly dispelled when German chancellor Merkel ruled out debt relief and refused to make any compromises and in fact demanded even more concessions from Greece including the privatisation of 50bn in Greek assets. Wolfgang Schäuble, the German finance minister even resorted to suggesting a temporary exit of Greece from the monetary union, but France who have been just as complicit in Greece’s plight, balked at the idea. Even the IMF, hardly a moral institution recognise the urgency of considerable debt relief. Syriza’s negligence in failing to devise a contingency plan has proven to cost the Greek people dearly. There has been dissension within their own ranks, with the far left faction of their party calling for a no vote on the bailout agreement, this schism will likely lead Syriza to split. But without a viable alternative which Syriza should have had devised prior to now, rejecting the deal is not a reasonable option.

“We had a small group, a ‘war cabinet’ within the ministry, of about five people that were doing this: so we worked out in theory, on paper, everything that had to be done, to prepare for/in the event of a Grexit. But it’s one thing to do that at the level of 4-5 people, it’s quite another to prepare the country for it. To prepare the country an executive decision had to be taken, and that decision was never taken.”

Syriza thought they could reconcile Eurozone membership with a fair economic system, it’s now clear that was a mirage. But characterising it as a betrayal is inaccurate, what’s hard to overlook is the majority of Greeks did not want to exit the Eurozone, nor did Syriza have a mandate to follow through with that plan.
So while it’s certain they should have devised an alternative strategy they still would have had to gain the permission from the Greek electorate, who up until this point have insisted they want to remain part of the Eurozone.
So the Germans exerted their immense leverage to compel Syriza to surrender, well aware the Greeks hadn’t fully planned for the eventuality of leaving the Euro. Some have even claimed that Germany’s actions have amounted to an attempt to overthrow the elected government, their demands designed to eradicate Syriza and get a new party in power who are more amenable and compliant. The goal of wanting to end austerity while wanting to preserve your place in the Eurozone is irreconcilable, it really is a case of an either or proposition. If Syriza have any eagerness to liberate the Greek people they will now have to recognise the people they are negotiating with can’t be reasoned with. They must now mobilise their party for preparation towards an exit from the Eurozone and prepare a referendum seeking the permission of the Greek electorate to execute their plan.

Mariana Mazzucato, an economist who is professor at the University of Sussex on the economic absurdity of Troika’s impositions:

“As happened elsewhere, the massive private debt later translated into a massive public debt. While the Greek system was laden with different types of inefficiencies, it is simply not true that the problems were solely due to an inefficient public sector and different types of ‘rigidities’. The problems were also caused by an inefficient private sector, that got by only through increased indebtedness and the use of “structural funds” from the EC to make up for their own lack of investments. When the financial crisis laid bare this problem, the government ended up having to bail out banks, and found itself with a massive fall in tax revenue due to falling incomes and jobs. Greek debt/GDP levels, like those in most countries, rose exponentially after the crisis for these reasons.

The reaction of the Troika was to impose austerity, which as we now well know caused Greek GDP to fall by 25% and unemployment to reach record levels—permanently destroying opportunities for generations of young Greeks. Syriza inherited the disaster and focused on the need to increase cash by increasing tax revenue through battling tax evasion, corruption, monopolistic practices, and even fuel and tobacco smugglers. It agreed to begin reforming labour laws, cut spending and to increase the retirement age. Some errors were made by the young government, but it surely cannot be said that they were not making headway as many of these reforms had indeed begun. Indeed, during the new government’s first four months, the treasury reduced the deficit massively, and had a primary budget surplus of €2.16bn (not including debt interest payments), which far exceeded their initial target of a €287m deficit.

Did the austerity help? No. As John Maynard Keynes stressed, during bad times when consumers and the private sector are cutting back, it makes no sense for government to cut as well. This is what makes recessions turn into depressions. Instead the Troika asked for more and more cuts, and wanted them made even more quickly, giving the Greeks little breathing room to continue with the reforms that they had begun. And making it impossible to get Greece back on its feet (only through future growth will they pay back the debt) through any sort of investment strategy.

The European project was built on the ideas of solidarity and unity, or at least that’s the type of rhetoric we heard. Countries would have common goals, and there would be a collaborative effort to help attain those goals. But what’s unfolded is sadly an aberration of those ideals. Germany has emerged as the hegemon in the Eurozone wielding massive economic leverage, and able to make other countries comply or face its wrath. What’s happened in Greece sets a troubling precedent. If any other countries try and resist the flawed and inhumane policies of Troika, it’s more than likely they will face a harsh reaction too.
But that is not an excuse for defeatism, the forces we’re up against are certainly formidable, but defeating them is by no means insurmountable. Syriza’s defeat should not deter us, but motivate us to fight even harder. There is too much at stake to roll over.

Insightful pieces pertaining to the deal: